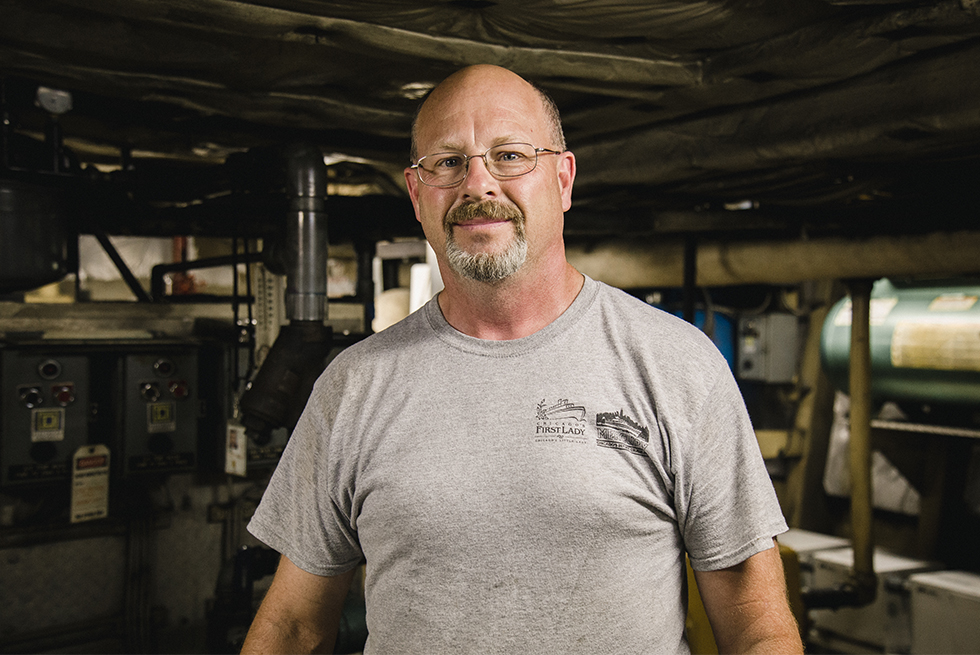 Meet Mike Shivers, a Chicago's First Lady and Mercury Cruises employee who has been with the company since 2011. With this being his seventh season with the company, Mike serves as Chief Engineer helping repair and maintain the ships throughout the year and overseeing many projects. Outside of work he also serves as Trustee of his local fire district board and a commander of his chapter of Sons of the American Legion Squadron. During the summer, Mike takes advantage of Chicago's warm weather by golfing during the weekend and is currently working on restoring his grandfather's 1946 Formal A tractor. Read Mike's interview below to learn more about him.

Why did you become an engineer?
I received a degree in college in animal science, I studied pigs. When I couldn’t find a job doing what I wanted to in that field, I got a job on a Joliet casino boat as a barback.  Six months later I moved to engineering because I like to work with my hands and dealing with a stubborn engine or pump is a lot easier than dealing with a drunk patron.

Tell us about your most interesting job.
Certainly working on a casino boat was interesting and I learned a lot, but in college, I worked at a research farm that was one of only three in the country that was allowed to study two breeds of hogs brought over from China. We dealt a lot with genetics and breeding to try and find a lean meat hog that we had here in the states but would have the traits of more disease resistant and larger litters like the Chinese hogs had. 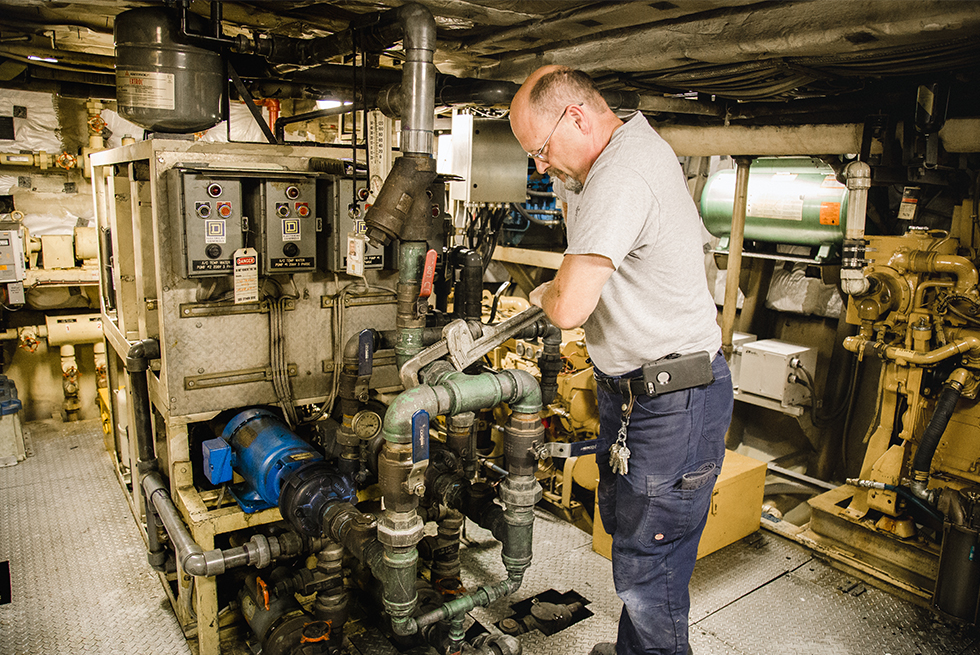 As a child, what did you want to do when you “grew up”?
I changed occupations countless times growing up, but living most of my life in the country and coming from a farming family, I wanted to be involved in agriculture.

What is your favorite building on the tour and why?
Honestly, I’m not much into architecture. I appreciate the different styles and the fact Chicago has a great mix of it, but I tend to be more interested in the bridges. Engineering, go figure.

Tell us about a memorable experience on the job at Chicago’s First Lady Cruises/Mercury Cruises.
About three or four years ago we were on Fair Lady getting ready to leave dock 1 to do drills for the Coast Guard inspection. Suddenly the captain is calling man overboard and the inspector says, “I haven’t started the drill yet”. The captain goes, “no, there really is someone in the water off our bow”. Sure enough, a lady had fallen in and we did a real MOB rescue without even leaving the dock. Needless to say, we passed the inspection.

Where did you grow up?
Mostly in Illinois. Springfield area, Champaign area and where I am now, Peotone which is about 50 miles south of downtown. 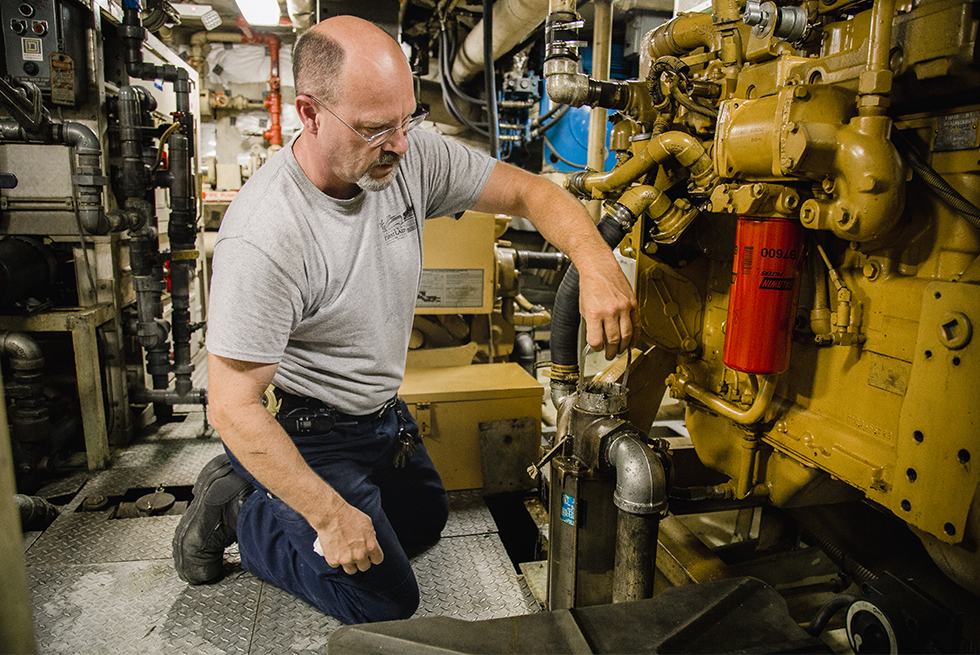 What are three passions of yours?

What is the most adventurous thing you've ever done?
Once, while on a long hike in Boy Scouts, we crossed a long train trestle or bridge that was just ties and rails, no sides and about 500 tall! We got across just before a train came through. I’m not big on heights and that scared the daylights out of me.

What is the next destination on your travel wish list?
Norfolk, Virginia. I’d like to see the military ships there 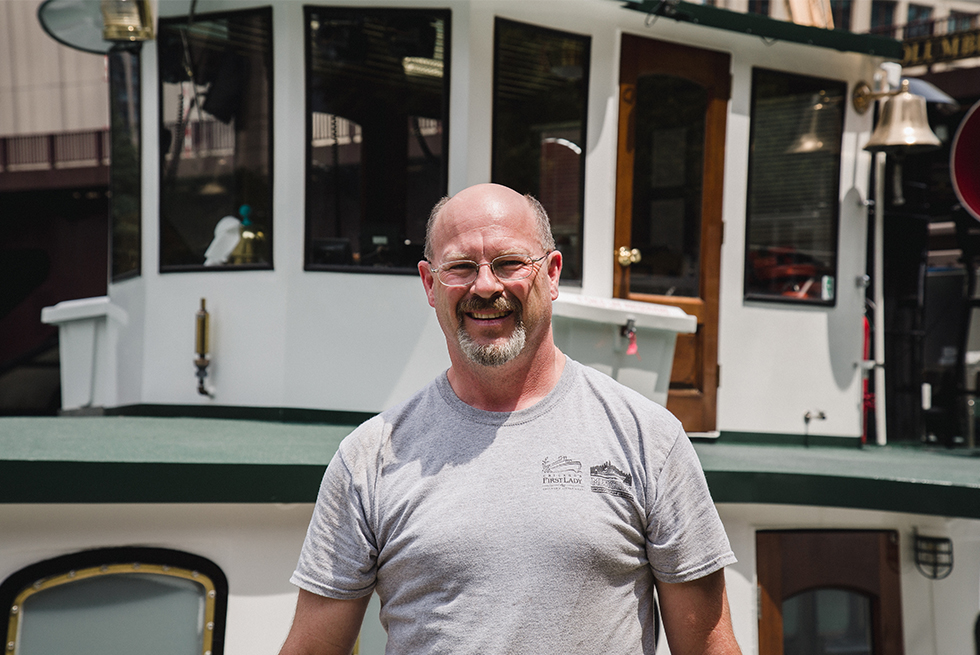 What is something people are surprised to learn about you?
Most people are surprised that I didn’t go to school for what I do. I took a few classes in refrigeration and motor controls, but most of what I know comes from on the job learning. When a problem arises, I’ve always just jumped in and tried to figure it out. A little research online or in a manual and a lot of watching someone who knows what they’re doing while working on something along with just getting my hands dirty has gotten me where I am.